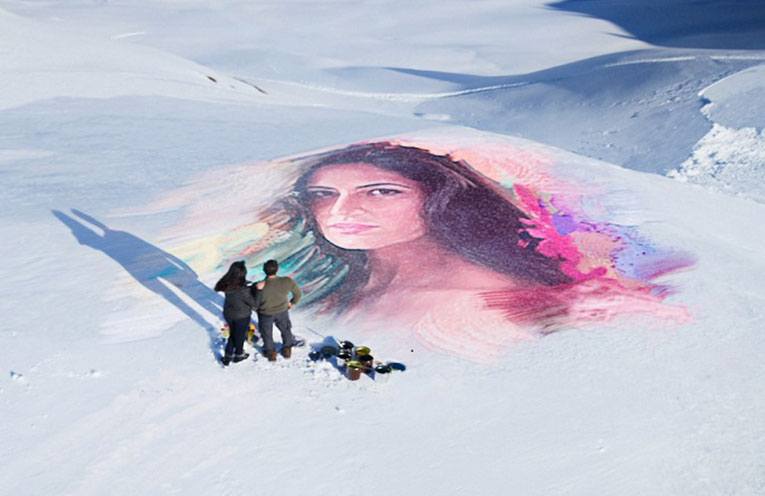 Katrina Kaif and Salman khan are one of the most talked about on screen and off screen couples. The duo will be seen again in “Tiger Zinda hai.” The trailer has left Salman Khan’s fans in awe and they can’t wait for the movie to release. If the trailer wasn’t enough, the song “Swag Se Swagat” has been a super hit and has hit more than 45 million views on Youtube, Phew!

The makers are all set to release their next song “Dil Diyan Gallan.” And will be probably releasing the song on Big Boss, which is also hosted by Salman Khan. The song was shot in Austria in freezing cold and that’s when Salman decided to showcase his talent as a painter. We all know what a great painter Salman is and this time his muse was Katrina Kaif. He made a painting of Katrina on Ice.

The director of movie Ali Abbas Zafar says “Salman and Katrina shot this song on some very difficult terrain in the Alps. The biggest highlight of this song is the unique Katrina portrait that he has drawn on a frozen lake. We had to shoot on this lake and Salman converted it to a canvas. We had to source natural colours, as ice doesn’t catch all kinds of paints, which didn’t come easy. But once we got hold of this, he created a huge 20 feet by 20 feet portrait that features Katrina’s face. It’s a sight for sore eyes, this painting, and it makes Dil Diyan Gallan a truly unique romantic song visually”

NGT clears a deadline to submit the action plan of Air Pollution to Delhi Govt in 48-hour.