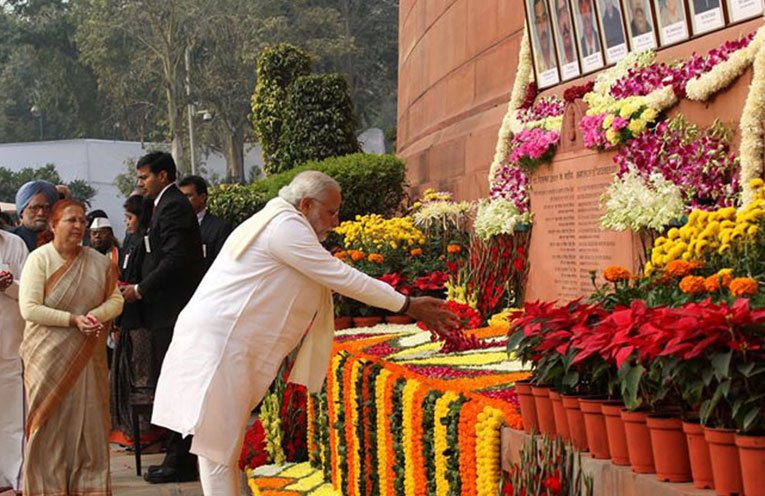 We pay homage to those who laid down their lives protecting the temple of our democracy on 13th December 2001. Their sacrifices will never be forgotten. pic.twitter.com/Fn4RYDvqxL

On December 2001, The same date, in a horrific incident, Five terrorists with armored arms linked to the terrorist organization Lashkar-e-Taiba (LeT) and Jaish-e-Mohammed (GM), brutally opened fire in the parliament complex, New Delhi.

This Incident went on for 40 minutes and at that time 100 parliament members were inside the parliament. On this Incident around 14 people were killed, most of them from security force and one civilian died.

“On this day in 2001, our brave soldiers and Parliament staff repulsed the attack on our Parliament House. Respects to our martyrs. The nation shall remember their sacrifice with pride. @DefenceMinIndia” tweeted by Defence Minister Nirmala Sitharaman.

On this day in 2001, our brave soldiers and Parliament staff repulsed the attack on our Parliament House. Respects to our martyrs. The nation shall remember with pride their sacrifice. @DefenceMinIndia

Homage to martyrs whose supreme sacrifice to protect our temple of democracy will never be forgotten by a grateful Nation. #ParliamentAttack pic.twitter.com/zqNo0Aoina

Remembering those bravehearts who made supreme sacrifice this day in 2001 to protect our Parliament.
Salute🌺👏
You all will remain ALIVE in heart of Indian Democracy ! @adgpi#ParliamentAttack pic.twitter.com/ntNOraHXVg

My homage to the martyrs of #ParliamentAttack. My head bows to them for their supreme sacrifice, and their fight to the finish for the protection of our citadel of democracy.

Remembering the brave soldiers and security personnel who laid their lives to protect the temple of our democracy during #ParliamentAttack.

My homage to the brave martyrs who sacrificed their lives to safeguard the house of Indian democracy – our Parliament, on the anniversary of #ParliamentAttack

Manushi Chhillar to star in Student of the year 2?