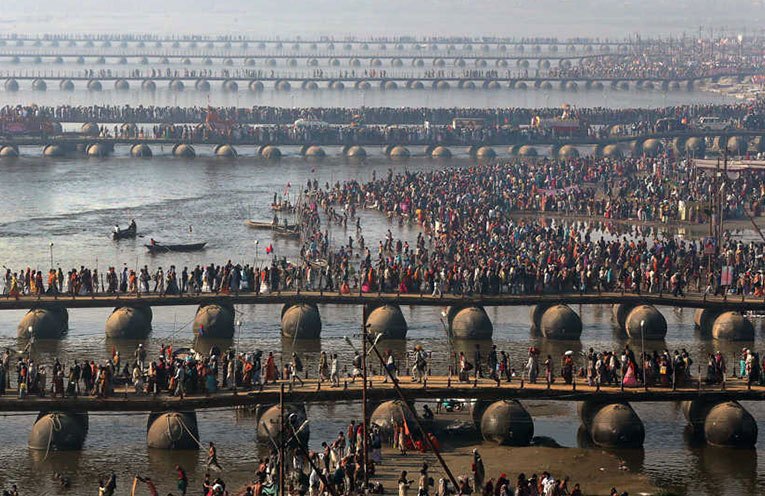 The faith of Hinduism pilgrimage, ‘Kumbh Mela’ a big festival has been listed as “Intangible Cultural Heritage of Humanity” by UNESCO. The decision of listing the ‘Kumbh Mela’ was announced at UNESCO’s ongoing 12th session in Jeju, South Korea.

The honorable Prime Minister of India, Narendra Modi described it as a matter of pride and joy for all Indians, who lived not only in India, but for those also who lived outside the country.

Thursday at Jeju, South Korea, the External Affairs Ministry said, that the listing was announced by Inter-governmental Committee for the Safeguarding of the Intangible Cultural Heritage, which works under UNESCO as an entity. The session which started from 4th December, will be ending on 12 december 2017.

The inscription of the Kumbh Mela was submitted by Member States, Which was recommended by the expert body who examines the nominations in details. After the inscriptions of Yoga and Nouroz, this is the 3rd inscription in last 2 years for India following.

“Kumbh Mela is the largest peaceful congregation of pilgrims on earth” observed Intergovernmental Committee said by the ministry. The tolerance and inclusiveness of the Kumbh Mela demonstrates are really necessary for the contemporary world as a religious festival.

The Cultural Minister of India, Mr. Mahesh sharma reacted to this accreditation and tweeted “A very proud moment for us as sacred Kumbh Mela is just inscribed as the Intangible Cultural Heritage of Humanity by UNESCO.”

Kumbh Mela is considered to be the largest peaceful congregation of pilgrims on earth, attended by millions irrespective of caste, creed or gender. pic.twitter.com/8Lq6z4vKyf

What is Kumbh Mela?

The Kumbh Mela is the largest religious gathering on this earth and held in every 12 years on Sangam. Sangam is the confluence of the holy rivers Ganga, Yamuna and the mythical Saraswati. The Mela arranged between Allahabad, Haridwar Ujjain and Nasik in every three years. Kumbh Mela which is celebrated at ‘Sangam’ the Holy place of hindus which is in Allahabad is the largest and holiest of them all.

India has such wealth of incredible heritage, both tangible and intangible.
it's about time that it gets recognised world wide.
No other country can compare, yet so far #India did not get her due.
My account of the #KumbhMela https://t.co/E4N5MGvLFm @MinOfCultureGoI

Inscription of #KumbhMela by @UNESCO on the Representative List of Intangible Cultural Heritage of Humanity. Represents cultural diversity, harmony and inclusiveness. Joins #yoga and #nouroz on list. Press release at https://t.co/wybcZ8ilcd pic.twitter.com/FZgUSglPfO